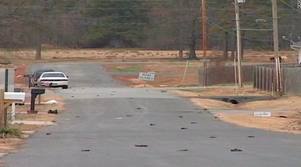 The thousands of birds that fell from the sky just before midnight New Year’s Eve in Arkansas likely died from massive trauma, according to a preliminary report released Monday.

The birds, most of which were dead when they were found, were red-winged blackbirds and starlings. They were found within a one-mile area of Beebe, about 40 miles northeast of Little Rock, the Arkansas Game and Fish Commission said.

Keith Stephens, a spokesman for the commission, said the birds showed evidence of trauma in the breast tissue, with blood clots in the body cavity and a lot of internal bleeding. All major organs were normal.

More than likely, the birds over celebrated New Years and flew into a frozen cloud.