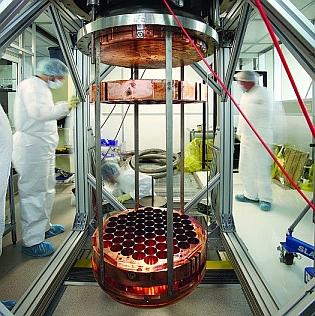 Between 1876 and 2002, the people of Lead, South Dakota, extracted $3.5 billion worth of gold from the Homestake mine. It was the town’s main business, and when falling prices and diminishing returns finally shut it down, no one was sure what to do with the remaining 8,000-foot hole in the ground. Then, in 2007, the National Science Foundation decided that an 8,000-foot hole would be the perfect place to put its proposed Deep Underground Science and Engineering Laboratory, or DUSEL, a massive research complex that will include the world’s deepest underground lab.

Now a team of physicists and former miners has converted Homestake’s shipping warehouse into a new surface-level laboratory at the Sanford Underground Laboratory. They've painted the walls and baseboards white and added yellow floor lines to steer visitors around giant nitrogen tanks, locker-size computers and plastic-shrouded machine parts. Soon they will gather many of these components into the lab’s clean room and combine them into LUX, the Large Underground Xenon dark-matter detector, which they will then lower halfway down the mine, where—if all goes well—it will eventually detect the presence of a few particles of dark matter, the as-yet-undetected invisible substance that may well be what holds the universe together.

The LUX project is just one of at least 10 efforts worldwide to find direct evidence of dark matter, and with a Nobel Prize and longer-term federal investment in play, the 50 researchers of LUX and 2,848 citizens of Lead (pronounced “leed”) are pretty open about wanting to be first. But already there are problems.

For several hours now on this June afternoon, I’ve been watching through a window into the clean room as four physicists dressed in identical white Tyvek suits, latex gloves, blue booties, surgical masks and protective glasses prepare to connect two of the primary components of the detector. The inner cryostat is a hollow cylinder the size of a trash can that everyone refers to simply as “the can,” and at the moment it is down below floor- level in a grate-covered pit. Hanging from a frame above the pit is the dome, which is a kind of lid for the can, and hanging from the dome itself is a complex assemblage called the skeleton. The idea is to carefully raise the can up around the skeleton, nesting one inside the other like a matryoska doll, until it connects with the dome cap, making a perfect seal.

The entire assemblage will eventually contain 31 gallons of –154°F liquid. xenon—the medium that will actually detect the dark matter— so precision is essential. But the various parts were machined at different sites, and without that perfect seal, air and impurities could infiltrate the experiment, potentially compromising the results. As Tom Shutt, a physicist at Case Western Reserve University and the co-founder of the LUX project, explains, “We’ve been on pins and needles to know how tight this can will be.”

Before they lift the can, though, the team must complete the skeleton itself. Right now it consists of little more than six thin titanium straps hanging down from the inner rim of the dome. The next task is to insert the three thick disks that make up the bulk of the skeleton. One of the physicists, hand-operating a small forklift, raises one of the copper disks to waist-height, and the others adjust a temporary support that will hold it in place as they make final adjustments to bolt it to the titanium straps. This process continues for each of the three disks: Lift, tighten, adjust, confer, adjust.

The physicists work their way down the skeleton until finally they are on hands and knees, spinning bolts into the last copper slab, just about six inches from the floor. In slow succession, they sit back on their heels or stand up to observe their handiwork. Shutt, who was responsible for coordinating the fabrication of the can, is up next. He excuses himself and heads to the clean room’s antechamber to suit up. (Common dust, the type one might drag in from anywhere, can have high levels of radioactivity that could obscure the signal if the detector does find dark matter.)

He is soon joined by an additional grad student, and the clean room is getting crowded. The six physicists wheel the skeleton-bearing frame to the side and open the pit’s grate. One of them climbs down inside, connects two cables to the can, and scrambles out of the way. The cables are threaded through two pulleys on the frame, which the team slides back into place. They attach stacks of weights to the other ends of the cables, creating a simple elevator, and begin to slowly raise the can up and around the skeleton. Shutt stands to the side, his hands held palms out, fingers wiggling in anticipation like a kid waiting to open a gift.

Other scientists from the LUX project are gathering for the big moment—the moment when they will see if the can actually fits to form a functional detector—and I get elbowed over to the side window where the grad students have congregated. As the can nears the top, the murmurs die down. The skeleton is sliding perfectly into place. But, less than an inch from the dome, where the can should finally lock into place, it jams. Shutt and his team try to ease it up, and they try shoving it, but it just won’t budge. The physicists suspect that the can’s dimensions or the shape of the skeleton are off. Despite this apparent setback, they gamely pose for a few photos. Then they methodically lower the can back into the pit. They’ll try again tomorrow.