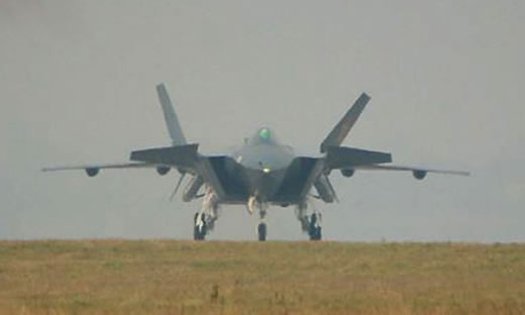 The Defense Ministry of the People’s Republic of China would like to wish you a happy new year – and welcome you into a new era. China’s first known stealth aircraft (maybe) appeared across the Web over the past week or so in a series of pictures depicting what appear to be high-speed taxi tests at Chengdu Aircraft Design Institute’s airfield. Reportedly known as the J-20, the emergence of the alleged long-range single-seater suggests China is ahead of schedule in its plans for a revamped air force and could have a stealth plane in the sky by 2017, three years earlier than expected.

China’s pursuit of a stealth military plane has been well-publicized by both China and others in the defense business (U.S. Defense Secretary Robert Gates predicted last year that China would field an operational stealth plane by 2020). But its emergence for testing so soon indicates that China is ahead of the game.
And it seems China wants everyone to know it without saying so outright. According to Bill Sweetman over at Aviation Week, the test airfield is not extremely secure and can be viewed from several public areas. Photography is officially forbidden, yet security was allowing cell phone photography near the premises, and though there was an early “effort” to censor photos that emerged on Chinese message boards, the People’s Republic quickly relaxed those efforts as well.

So what do we know about the J-20 from these pics? For one, it’s big and it’s long, suggesting it can carry heavy weapons loads and lots of fuel for long-range missions (it also suggests it likely won’t be launching from the aircraft carriers China also reportedly is developing). Comparison to vehicles on the ground shows the J-20 to be some 75 feet long with a 45-foot wingspan – bigger than the F-22. It also has a higher ground clearance than the F-22, suggesting it can load larger munitions like air-to-surface weapons.

The real question, it seems, is whether the J-20 pictured here is a proper prototype or a technology demonstrator. We’ll find out when China either does or doesn’t roll out further J-20s for flight tests. Or when China drops another hint to the world via “secret information” leaked all over the Web.