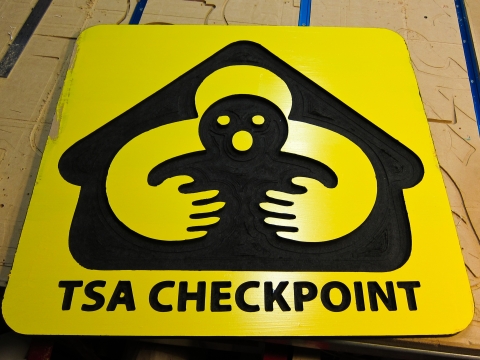 The Department Of Homeland Security, headed up by ‘Big Sis’ Janet Napolitano has filed an answer brief (PDF) in the ongoing lawsuit brought against the TSA over the controversial use of radiation-firing naked imaging scanners.

The DHS claims that the scanners are fully compliant with Constitutional requirements and that all other claims that the body imaging program is unlawful are “meritless”, “baseless” and “unfounded”.

The Electronic Privacy Information Centre (EPIC) filed its opening brief (PDF) with the District of Columbia Court of Appeals on November 1st, outlining a number of violations and calling for the courts to halt the US government’s use of naked body scanners altogether.

“The suspicionless search of all airport travelers in this most invasive way violates the reasonableness standard contained in the Fourth Amendment,” Marc Rotenberg, executive director of EPIC, has stated.

EPIC also notes that the devices, which will ultimately cost taxpayers nearly $1 billion, were designed “to store and record and transmit the unfiltered image of the naked human body.”

EPIC has brought claims under the Administrative Procedure Act, the Privacy Act, the Video Voyeurism Prevention Act, the Religious Freedom Restoration Act, and the Fourth Amendment.

Chip Pitts, co-plaintiff in the suit, believes at the very least the program needs to be the subject of a deeper investigation. “We’re sleepwalking into a surveillance society,” Pitts stated.

The TSA answer brief cites previous cases in which the use of AIT body scanning technology has been upheld as a reasonable search under the Fourth Amendment.

It also dismisses claims against the scanners under the Privacy Act, noting that it “provides an express exception for lawful law enforcement, correctional or intelligence activities”, and rejects the notion that the scanners violate the Video Voyeurism Prevention Act, claiming that the “TSA’s use of AIT neither creates nor is part of a system of records.”

EPIC will argue that the scanners are not part of a law enforcement program, rather they target the public without suspicion, and that there is direct evidence that the machines do indeed store and are capable of transferring images of naked bodies.

We have repeatedly highlighted the subterfuge and outright lies used by the DHS and the TSA in their defense of the scanners.

Oral testimony in the lawsuit has now been scheduled to be heard in March after repeated attempts by the federal government to delay and block it.

Amazon, Hawaiian Airlines gear up for 2023 launch of Airbus freighters