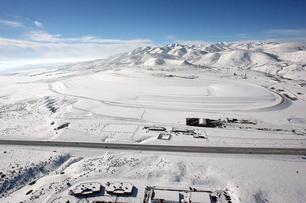 CAMP WILLIAMS — Today's groundbreaking for a $1.5 billion National Security Administration data center is being billed as important in the short term for construction jobs and important in the long term for Utah's reputation as a technology center.
"This will bring 5,000 to 10,000 new jobs during its construction and development phase," Sen. Orrin Hatch, R-Utah, said on Wednesday. "Once completed, it will support 100 to 200 permanent high-paid employees."

A White House document identifies the Comprehensive National Cyber-security Initiative as addressing "one of the most serious economic and national security challenges we face as a nation, but one that we as a government or as a country are not adequately prepared to counter." The document details a number of technology-related countermeasures to the security threat.

Hatch said Utah was chosen for the project over 37 other locations. He characterized the cyber-security center as the "largest military construction project in recent memory."

The Army Corps of Engineers is overseeing the project that is under contract to a joint venture between Big-D Construction in Salt Lake City, U.K.-based Balfour Beatty Construction and DPR Construction out of California.

"This project is going to give an opportunity for an awful lot of Utahns" who have seen construction jobs in Utah drop from 100,000 in 2008 to about 66,000 today, said Rob Moore, president and COO of Big-D and chairman of the Associated General Contractors in Utah. "My subcontractors, suppliers and vendors are very appreciative of the work that will be available on this project."

Grading work is already under way for the complex, which is scheduled to include 100,000 square feet for the data center and 900,000 square feet for technical support and administrative space. The center is designed to be capable of generating all of its own power through backup electrical generators and will have both fuel and water storage. Construction is designed to achieve environmentally significant LEED Silver certification.

1 Comments in Response to Utah's $1.5 BILLION Cyber-Security Center Under Way

The purpose of this center is to record and listen to law abiding citizens' phone calls and monitor their emails and online activity.