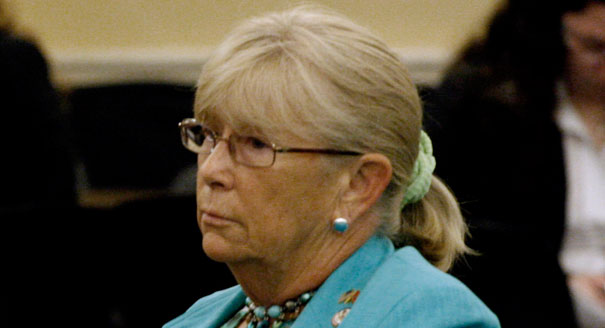 One of the fiercest gun-control advocates in Congress, Rep. Carolyn McCarthy (D-N.Y.), pounced on the shooting massacre in Tucson Sunday, promising to introduce legislation as soon as Monday targeting the high-capacity ammunition the gunman used.

McCarthy ran for Congress after her husband was gunned down and her son seriously injured in a shooting in 1993 on a Long Island commuter train.

Gun control activists cried it was time to reform weapons laws in the United States, almost immediately after a gunman killed six and injured 14 more, including Rep. Gabrielle Giffords, in Arizona on Saturday.

Many said that people with a history of mental instability, like the alleged shooter, Jared Lee Loughner, should not be able to buy a gun — and no one should be able to buy stockpiles of ammunition used by the 22-year-old assailant.

McCarthy said she plans to confer with House Speaker John Boehner and Minority Leader Nancy Pelosi to see “if we can work something through” in the coming week.

McCarthy’s spokesman confirmed the legislation will target the high-capacity ammunition clips the Arizona gunman allegedly used in the shooting, but neither he or the congresswoman offered any further details.

“Again, we need to look at how this is going to work, to protect people, certainly citizens, and we have to look at what I can pass,” McCarthy said. “I don’t want to give the NRA – excuse the pun – the ammunition to come at me either.”

Pennsylvania Rep. Robert Brady, a Democrat from Philadelphia, told CNN that he also plans to take legislative action. He will introduce a bill that would make it a crime for anyone to use language or symbols that could be seen as threatening or violent against a federal official, including a member of Congress.

Another vocal supporter for gun control, Illinois Rep. Mike Quigley, told POLITICO that he hopes “something good” can come from the Arizona tragedy – perhaps discussion on a new assault weapon ban, sales at gun shows and tracing measures.