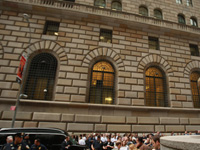 Deep inside the Federal Reserve Bank of New York, the $600 billion man is fast at work.

In a spare, government-issue office in Lower Manhattan, behind a bank of cubicles and a scruffy copy machine, Josh Frost and a band of market specialists are making the Fed’s ultimate Wall Street trade. They are buying hundreds of billions of dollars of United States Treasury securities on the open market in a controversial attempt to keep interest rates low and, in the process, revive the economy.

To critics, it is a Hail Mary play — an admission that the economy’s persistent weakness has all but exhausted the central bank’s powers and tested the limits of its policy making. Around the world, some warn the unusual strategy will weaken the dollar and lead to crippling inflation.