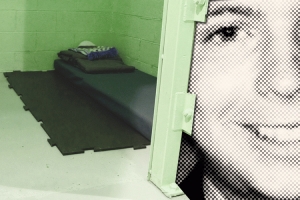 Bradley Manning, the 22-year-old U.S. Army Private accused of leaking classified documents to WikiLeaks, has never been convicted of that crime, nor of any other crime.  Despite that, he has been detained at the U.S. Marine brig in Quantico, Virginia for five months -- and for two months before that in a military jail in Kuwait -- under conditions that constitute cruel and inhumane treatment and, by the standards of many nations, even torture.  Interviews with several people directly familiar with the conditions of Manning's detention, ultimately including a Quantico brig official (Lt. Brian Villiard) who confirmed much of what they conveyed, establishes that the accused leaker is subjected to detention conditions likely to create long-term psychological injuries.
In sum, Manning has been subjected for many months without pause to inhumane, personality-erasing, soul-destroying, insanity-inducing conditions of isolation similar to those perfected at America's Supermax prison in Florence, Colorado:  all without so much as having been convicted of anything.  And as is true of many prisoners subjected to warped treatment of this sort, the brig's medical personnel now administer regular doses of anti-depressants to Manning to prevent his brain from snapping from the effects of this isolation.