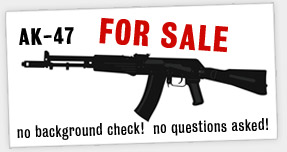 Rep. Gary Ackerman, a Democrat from New York, is the third congressman to propose a gun control bill in the wake of the murders on Saturday. (The other two are also New Yorkers.)

His bill seeks to accomplish a goal other gun control advocates have tried and failed to do in recent years: close the "fire sale loophole," which permits unauthorized gun dealers to sell firearms at gun shows and allows buyers to purchase them without an otherwise mandatory FBI background check.

Jared Loughner, the 22-year-old accused of perpetrating Saturday's shootings, purchased his firearm legally, passing an instant background check in a state many consider to have the most lax gun laws in the nation. Arizona does not require a permit for concealed carry.

Someone recently proposed a law that would prohibitcarrying a firearm within 1,000 yards of elected officials.

Wouldn't it be much better (certainly easier to enforce) to prohibit politicians from coming within 1,000 yards of firearms?

You miss  the larger point that guns are most useful to protect us against tyrannical government and that includes cops.

Gun control is going in the wrong direction.

Police are people. Police are often not on the scene on time to defend people against others who want to harm them with a gun (or any other way).

Since police are only people, all people should be required to pack guns to protect themselves from anybody who wants to harm them.

Require everybody to pack.

Which one's will the NRA help pass this time?