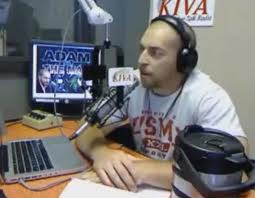 FOR IMMEDIATE RELEASE: January 13, 2011
CONTACT: Gerard Martinez (505) 577-3547 encantadoagency@gmail.com
Adam Kokesh adamvstheman@gmail.com
THREATENED IRAQ VET DENIED FREEDOM OF SPEECH & DEFENSE
Albuquerque – After sending out the press release below, Iraq veteran, former congressional candidate, and host of Adam VS The Man on AM 1550 KIVA, Adam Kokesh was “uninvited” from participating in the scheduled taping of “The Line” today for KNME TV. Despite receiving death threats, Kokesh was originally denied his request to legally open carry at the studios on the University of New Mexico campus, then abruptly denied his opportunity to participate in this publicly sponsored political talk program. At 11am this morning, KNME Director of Content Franz Joachim called Kokesh to inform him that because of the previous press release he was no longer welcome.

Regarding this gross disregard for public safety and freedom of speech, Kokesh said, “No Iraqi ever threatened me, but I was given a gun and told to patrol Iraq to fight for our freedoms. When I came home, fellow Americans threatened me, and I was denied my basic right to self-defense. Having a government sponsored institution making people feel unsafe to speak out politically is unacceptable.”

Albuquerque – As a guest for a taping of “THE LINE” for KNME TV last week, Adam Kokesh was unknowingly in violation of state law and University of New Mexico policy when he open carried his revolver into the studio. Adam Kokesh, an Iraq veteran, activist, former congressional candidate and host of Adam VS The Man on AM1550 KIVA, open carries on a daily basis. He says it is because, “I have received death threats in the past as a result of political speech and prefer to rely on myself for my personal protection rather than the government. After all, when seconds count, the police are just minutes away. I also believe that responsible gun ownership is in the best interest of public safety.”

Kokesh was scheduled to return each Thursday through the end of the month for three more tapings. On Tuesday, KNME producer Kevin McDonald emailed Kokesh to say, “I hadn’t faced it before, and wasn’t sure what the policies were ahead of time, so I didn’t say anything last week… but I have done my homework and have to let you know that you are not allowed to bring your gun into the station. We are technically part of the UNM campus, and they forbid it unless you are part of ROTC or a peace officer.” In that email, he included a link to the law and the UNM policy which forbids “weapons of any kind on campus.” He also pointed out, “I want you to know that no one complained about this last week.”

Kokesh responded by email, asking permission from UNM in accordance with state law. “In light of recent events in Tucson, I think it is particularly important for someone such as myself who has received death threats in the past to be able to carry a firearm for self defense. Unfortunately, I do not meet any of the criteria under the law that you point out. Neither would a deranged shooter, but they seem to have a pattern of ignoring just these kinds of laws. . . . I would like you to ask the university to approve me to be armed while on campus for the taping as a 'university approved program' as per section A.(4) of section 30-7-2.4 of New Mexico State law. Please let me know if the university will allow me to enter the campus armed before the taping tomorrow.”

According to McDonald's response by email, UNM Police denied his request. “I did talk to the UNM police finally and they said they would not approve an exception in this case, but said you are more than welcome to call the President’s office and try there. Without that permission from the President’s office, I’m afraid I’m just not going to be able to budge. I am sorry if all this puts a damper on your desire to participate, or even forces you to decide not to, but I completely understand if it does.”

Adam Kokesh plans to attend the taping tomorrow unarmed as he is willing to take what he described as a “small risk to spread the message of freedom” during his radio show last night. “While I do not expect this to be resolved before the taping tomorrow, I will continue to seek orderly resolution of this matter by personally contacting both the UNM police and the President's office.” The taping will take place at the KNME studios on the UNM campus at 1130 University Blvd NE at 4pm today.

They need to prosecute everyone that brings a car onto the campus.

THIS WILL GIVE YOU THE EDGE FOR PIRATE CHAIN - THE MOST PRIVATE CRYPTO OF ALL!