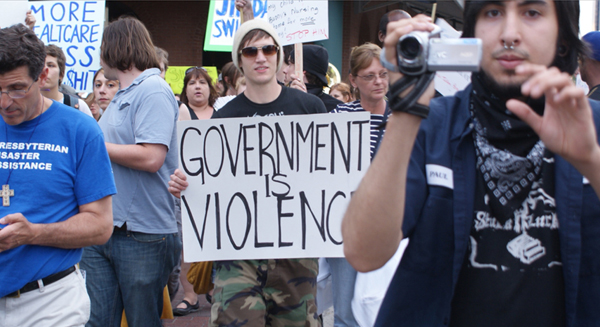 Jared Loughner is an extremist because he carried out the Arizona shootings while acting on his “political views,” Secretary of State Hillary Clinton said Wednesday.

“Based on what I know, this is a criminal defendant who was in some ways motivated by his own political views, who had a particular animus toward the congresswoman,” Clinton said in an interview with CNN. “And I think when you cross the line from expressing opinions that are of conflicting differences in our political environment into taking action that’s violent action, that’s a hallmark of extremism, whether it comes from the right, the left, from Al Qaeda, from anarchists, whoever it is. That is a form of extremism.”

Clinton added, “So, yes, I think that when you’re a criminal who is in some way pursuing criminal activity connected to – however bizarre and poorly thought through – your political views, that’s a form of extremism.”

Interesting comment:  "...we cannot allow a small, vocal, violent minority to intimidate the vast majority of people who have moderate views, who want to live their own lives, and who do not want to be put in a position where they are forced to keep silent or to follow a certain religious or political ideology. But people have to be willing to stand up against that."

I propose a letter-writing campaign acknowledging Hillary Clinton's support for those of us who "...want to live [our] own lives, and who do not want to be put in a position where [we] are forced to keep silent or to follow a certain religious or political [say, globalist?] ideology..." ; who are "...willing to stand up against that...", and refuse to "...allow a small, vocal, violent minority [government; banksters (and yes, stealing peoples' houses is doing violence to them); PNAC, etc] to intimidate [us] the vast majority of people..."?

If anybody should know about political violence, it would be our Hilly girl. Last I heard, they're still turning up bodies in Northwestern Arkansas.

Bovard: Liberals Learned Nothing In 2022

The Democrats Are About to Split the Country Irreparably

It's Time to Retire 'Classical Liberalism'

Democracy Wasn't On the Ballot, Extremism Was

Tucker Carlson: The left has run this country into the ground

Report: Innocent Car Badge Blasted By The Liberals For Being "Offensive"

AOC Humiliated At Town Hall In Viral Clip: 'Why Can't You Be More Like Tulsi Gabbard?'

Obedience is a killer: 91% of Biden voters took the DEATH jab…