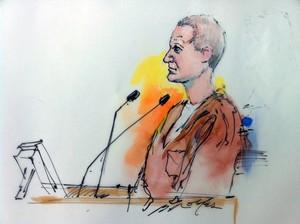 Jared Loughner in court Monday. Image by AFP/Getty Images via @daylife
In his YouTube videos and  postings on MySpace, alleged Arizona shooter Jared Lee Loughner echoed the bizarre beliefs of the extreme anti-government Sovereign Citizen movement. At least that’s the conclusion of  JJ MacNab, who for more than a decade has tracked (and infiltrated online) the world of tax protesters and anti-government extremists.

In a post Monday on the mental health treatment and gun control gaps the case highlights, I wrote, “It’s hard to decipher any coherent views from Loughner’s You Tube ramblings.”  Hard for me, that is. But MacNab, who I’ve known and respected for years, says Loughner’s weird references to “literacy” and “grammar” which mystify me, are Sovereign markers to her. “Sovereigns have their own set of complex cultural references and vocabulary, which they think that outsiders are just too stupid to understand,’’ she explains on her web site.

If MacNab is correct about Loughner, there are three important implications. First, finger pointing between left and right is off the mark in this case. “The world of Sovereign extremism exists outside of our traditional political spectrum, so labeling someone like Loughner a left-wing extremist or right-wing Teapartier doesn’t make any sense,” she writes.

In an interview Tuesday, MacNab explained that while the Sovereign movement has both white supremacist and tax protester roots, as it has spread (in large part over the Internet) it has also morphed. Newer and younger Sovereigns aren’t primarily white racists; some of the fastest growing Sovereign groups are African American and some Sovereigns even have left wing views. But like their predecessors, current Sovereigns consider the government illegitimate and embrace various bizarre and elaborate conspiracy theories, including that the government was involved in 9/11. (Loughner was reportedly a 9/11 truther.)

So what makes someone a Sovereign? The vast government conspiracy part is key says MacNab, who is writing a book on tax protesters and the Sovereigns.  On her web site she writes: “A Sovereign believes that every individual has more rights and power than any government agency or political body, but that sinister forces behind the government have systematically suppressed this secret knowledge in order to better enslave us all as `subjects.’ Depending on the sovereign group, the conspiracy behind the government is run by rich bankers, the Federal Reserve, Jews, Zionists, the Pope, the Queen of England, or in one extreme case, shape-shifting reptiles.” Moreover, she says, Sovereigns have a fixation with words that can expose this conspiracy, which they blame for their various problems—with taxes, debts, ex-spouses, child protective services, and so on.

MacNab notes that not all tax protesters are full-blown Sovereigns and not all Sovereigns have troubles with the IRS. Some Sovereigns have mental problems, some don’t. Overall, she estimates there are 300,000 Sovereigns in the U.S. and she believes that number is growing.

The second implication, if  Loughner subscribed to Sovereign beliefs: He could have a tougher time proving he’s not mentally competent to stand trial, is not criminally responsible for his alleged acts, or should receive a lesser punishment (for example, not the death penalty) because of mental illness.

Some Sovereigns have mental problems Understatement of the year.

Well Ms Loughner why do you skirt around the fact that this country was built on the belief that the citizen is sovereign?
Have you bothered to read the Declaration?  How does government get it's power if it is not from you and I?
This country Ms Lougher was founded on the belief that every citizen is sovereign and you paint this belief to be fringe and recently invented?  I really question your allegiance and motivations Ms Loughner.

It Is Official-the DOJ Is Weaponized

Ye STORMS OUT Of Timcast Studio During His Interview With Tim Pool, Milo, and Fuentes