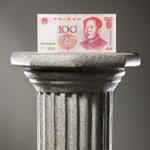 Chinese bank lets U.S. customers buy, hold yuan ... A state-owned Chinese bank says its New York City branch has begun offering accounts denominated in China's tightly controlled yuan in a move to expand the currency's global reach ... "They are trying to expand the scope of people who can hold renminbi (yuan) and that increases demand," said Daniel Hui, a foreign exchange strategist for HSBC in Hong Kong. Economists say the process of making the yuan an international currency on the level of the U.S. dollar, euro or yen will take years and depend on factors such as how many foreign companies want to use it. China's central bank governor, Zhou Xiaochuan, called in 2009 for a new global currency managed by the International Monetary Fund to replace the dollar for trade and storing reserves. Economists say such a change is unlikely, but the comments reflected Beijing's unease about the dollar, which it uses for the bulk of its trade and to store an estimated one-half of its $2.5 trillion in reserves. – USA Today

Dominant Social Theme: Watch out West – China's a-coming. The Biggest Tiger is on the loose.