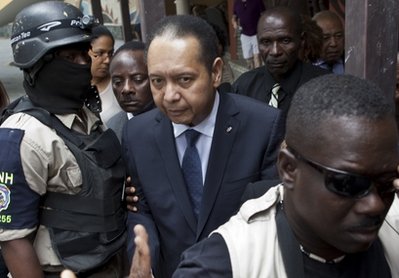 PORT-AU-PRINCE, Haiti – Haitian police led ex-dictator Jean-Claude Duvalier out of his hotel and took him to court Tuesday without saying whether he was being charged with crimes committed under his brutal regime.

A contingent of police led the former dictator known as "Baby Doc" through the hotel and to a waiting SUV. He was not wearing handcuffs.

Duvalier, 59, was calm and did not say anything. Asked by journalists if he was being arrested, his longtime companion Veronique Roy, laughed but said nothing. Outside the hotel, he was jeered by some people and cheered by others.

The SUV drove in a convoy of police vehicles to a courthouse, even as dozens of Duvalier supporters blocked streets with overturned trash bins and rocks to try to prevent the former dictator from going to prison.