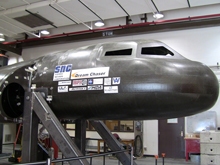 Once the space-shuttle program ends this year, the only way to get people into orbit and to the International Space Station will be to buy seats on Russia's three-person Soyuz capsules. So NASA, through its Commercial Crew Development program, has given $50 million in grants to companies developing new spacecraft capable of carrying people and supplies into orbit and to the space station.

The recipient of the biggest chunk of this money was the Sierra Nevada Corporation, which received $20 million to develop the Dream Chaser. This spacecraft, the size of a business jet, will take cargo and up to eight people into low Earth orbit, where the space station is located, and then return and land on commercial airport runways.