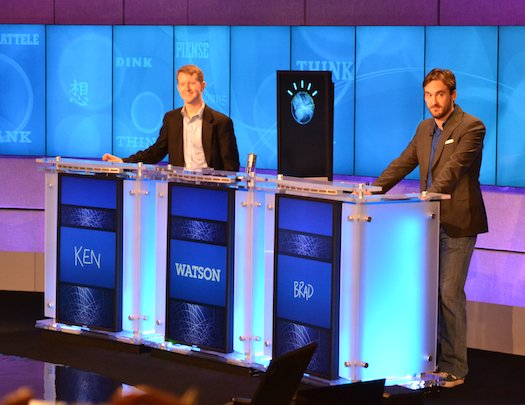 Today at IBM's headquarters in Yorktown, New York, an historic battle was staged. Two superstar Jeopardy! alums (Ken Jennings and Brad Rutter) faced off against IBM's supercomputer Watson in a preview round of America's most challenging trivia game, and we were there to see the thrilling man-on-machine action first-hand.

Watson, named after IBM's founder, is one epic supercomputer. To handle the formidable task that competing on Jeopardy! presents, IBM spent years constructing a computer with 2,800 Power7 cores. That power is absolutely necessary--a single-core CPU, like in many modern computers, takes about two hours to come up with an answer to a standard Jeopardy! question, rather than the three-second average Watson currently boasts.

The fate of the world economy may depend on what happens to a company...

Expert: Quantum Computing As Important As The Atomic Bomb

Zeroes and Ones: Into The Depths of Computation | Jim Keller and Dr Jordan B Peterson