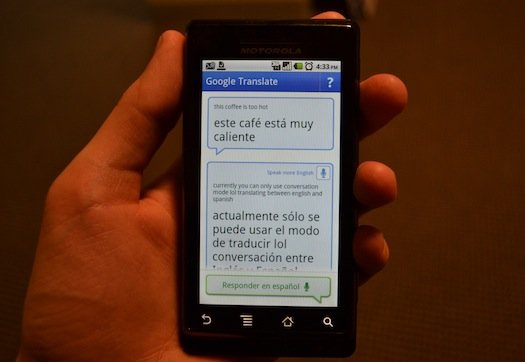 Learning a new language is hard. All those new grammatical rules, the new spellings, new tenses, irregular verbs--it's a serious pain. Luckily, Google Translate just issued an update to enable what Google's calling "Conversation Mode." Basically, it translates a multi-language conversation in real-time, spitting out a translation just as soon as you finish speaking. Now you can quit those painful language classes!

Translate, available in the Android Market for all Android phones with at least version 2.1 (read: almost every Android phone), now packs conversation mode. It's meant to simulate the duties of a translator: After each person is finished talking, the app translates and regurgitates the translation on the fly. It only works with English and Spanish at the moment, though as Translate supports 53 different languages (!), if Conversation Mode is a success, Google will probably bring it to more languages.