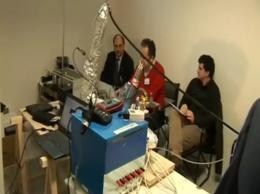 (PhysOrg.com) -- Few areas of science are more controversial than cold fusion, the hypothetical near-room-temperature reaction in which two smaller nuclei join together to form a single larger nucleus while releasing large amounts of energy. In the 1980s, Stanley Pons and Martin Fleishmann claimed to have demonstrated cold fusion - which could potentially provide the world with a cheap, clean energy source - but their experiment could not be reproduced. Since then, all other claims of cold fusion have been illegitimate, and studies have shown that cold fusion is theoretically implausible, causing mainstream science to become highly speculative of the field in general.

Despite the intense skepticism, a small community of scientists is still investigating near-room-temperature fusion reactions. The latest news occurred last week, when Italian scientists Andrea Rossi and Sergio Focardi of the University of Bologna announced that they developed a cold fusion device capable of producing 12,400 W of heat power with an input of just 400 W. Last Friday, the scientists held a private invitation press conference in Bologna, attended by about 50 people, where they demonstrated what they claim is a nickel-hydrogen fusion reactor. Further, the scientists say that the reactor is well beyond the research phase; they plan to start shipping commercial devices within the next three months and start mass production by the end of 2011.

Rossi and Focardi say that, when the atomic nuclei of nickel and hydrogen are fused in their reactor, the reaction produces copper and a large amount of energy. The reactor uses less than 1 gram of hydrogen and starts with about 1,000 W of electricity, which is reduced to 400 W after a few minutes. Every minute, the reaction can convert 292 grams of 20°C water into dry steam at about 101°C. Since raising the temperature of water by 80°C and converting it to steam requires about 12,400 W of power, the experiment provides a power gain of 12,400/400 = 31. As for costs, the scientists estimate that electricity can be generated at a cost of less than 1 cent/kWh, which is significantly less than coal or natural gas plants.

Rossi and Focardi explain that the reaction produces radiation, providing evidence that the reaction is indeed a nuclear reaction and does not work by some other method. They note that no radiation escapes due to lead shielding, and no radioactivity is left in the cell after it is turned off, so there is no nuclear waste.

The scientists explain that the reactor is turned on simply by flipping a switch and it can be operated by following a set of instructions. Commercial devices would produce 8 units of output per unit of input in order to ensure safe and reliable conditions, even though higher output is possible, as demonstrated. Several devices can be combined in series and parallel arrays to reach higher powers, and the scientists are currently manufacturing a 1 MW plant made with 125 modules. Although the reactors can be self-sustaining so that the input can be turned off, the scientists say that the reactors work better with a constant input. The reactors need to be refueled every 6 months, which the scientists say is done by their dealers.

The scientists also say that one reactor has been running continuously for two years, providing heat for a factory. They provide little detail about this case.

One of three videos of last Friday's demonstration shows the reactor. The clicking sound is made by the water pump.

Rossi and Focardi’s paper on the nuclear reactor has been rejected by peer-reviewed journals, but the scientists aren’t discouraged. They published their paper in the Journal of Nuclear Physics, an online journal founded and run by themselves, which is obviously cause for a great deal of skepticism. They say their paper was rejected because they lack a theory for how the reaction works. According to a press release in Google translate, the scientists say they cannot explain how the cold fusion is triggered, “but the presence of copper and the release of energy are witnesses.”

The fact that Rossi and Focardi chose to reveal the reactor at a press conference, and the fact that their paper lacks details on how the reactor works, has made many people uncomfortable. The demonstration has not been widely covered by the general media. However, last Saturday, the day after the demonstration, the scientists answered questions in an online forum, which has generated a few blog posts.

One comment in the forum contained a message from Steven E. Jones, a contemporary of Pons and Fleishmann, who wrote, “Where are the quantitative descriptions of these copper radioisotopes? What detectors were used? Have the results been replicated by independent researchers? Pardon my skepticism as I await real data.”

Steven B. Krivit, publisher of the New Energy Times, noted that Rossi and Focardi’s reactor seems similar to a nickel-hydrogen low-energy nuclear reaction (LENR) device originally developed by Francesco Piantelli of Siena, Italy, who was not involved with the current demonstration. In a comment, Rossi denied that his reactor is similar to Piantelli’s, writing that “The proof is that I am making operating reactors, he is not.” Krivit also noted that Rossi has been accused of a few crimes, including tax fraud and illegally importing gold, which are unrelated to his research.

Rossi and Focardi have applied for a patent that has been partially rejected in a preliminary report. According to the report, “As the invention seems, at least at first, to offend against the generally accepted laws of physics and established theories, the disclosure should be detailed enough to prove to a skilled person conversant with mainstream science and technology that the invention is indeed feasible. … In the present case, the invention does not provide experimental evidence (nor any firm theoretical basis) which would enable the skilled person to assess the viability of the invention. The description is essentially based on general statement and speculations which are not apt to provide a clear and exhaustive technical teaching.” The report also noted that not all of the patent claims were novel.

Giuseppe Levi, a nuclear physicist from INFN (Italian National Institute of Nuclear Physics), helped organize last Friday’s demonstration in Bologna. Levi confirmed that the reactor produced about 12 kW and noted that the energy was not of chemical origin since there was no measurable hydrogen consumption. Levi and other scientists plan to produce a technical report on the design and execution of their evaluation of the reactor.

Also at the demonstration was a representative of Defkalion Energy, based in Athens, who said that the company was interested in a 20 kW unit and that within two months they would make a public announcement. For the Rossi and Focardi, this kind of interest is the most important.

“We have passed already the phase to convince somebody,” Rossi wrote in his forum. “We are arrived to a product that is ready for the market. Our judge is the market. In this field the phase of the competition in the field of theories, hypothesis, conjectures etc etc is over. The competition is in the market. If somebody has a valid technology, he has not to convince people by chattering, he has to make a reactor that work and go to sell it, as we are doing.”

He directed commercial inquiries to info(at)leonardocorp1996.com .