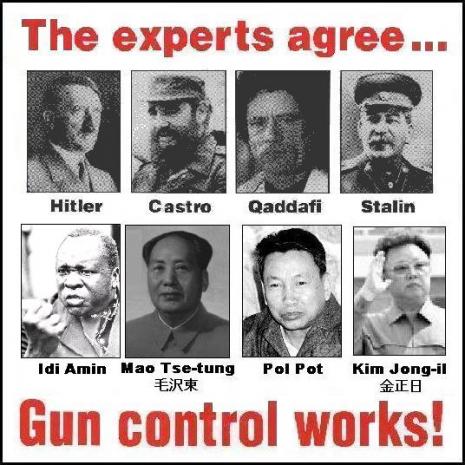 WASHINGTON — There has been no major shift in US public opinion about the role of guns in America after the shooting of a US member of congress in Arizona, according to a poll out Wednesday.

A Pew Research Center poll showed that 49 percent of people polled say it is more important to protect the right of Americans to own guns than to control them, against 46 percent who prioritize gun control.

In September 2010, 50 percent of those polled prioritized laws for gun control against 46 who prioritized gun rights, according to Pew.

"There is no sign that the longer trend toward an emphasis on gun owners' rights has abated," Pew said.

"No shift for US gun control after Tucson shooting…" headline. Good. You can now shoot gophers in your yard without looking over your shoulder.

This guy wonders why guns should be controlled. He is probably a gunslinger …a midnight cowboy whose life depends on a six-shooter. "If you had a gun strapped to your hip, would you ever use it if you were NOT first provoked?" he asked cynically. YES. Whacko[s] in Tucson, Texas believe the world always provokes them first before the pull the trigger.

No shift in America,  Word has it Obama may call for some form of gun control during his state of union address come Tuesday.Obama.  got his 9/11. and used it for gain to raise his approval ratings. we saw a president use a murderous  act as a campaign platform..only the few noticed that no one could have designed  and printed 14.000 t-shrits in such a short time frame. even if they started minutes after the act. it  takes 3days just for the design. and then 2+days min to order & get the shirts from the supplier and start printing which would take 3days' going 24/7. thats 8 days he did it in 4 max..not even the largest  print  company could do that...RED FLAGS flying all over the field

Since those of the police who are really on the side of the people... who would protect us all... who would have protected Giffords and those others... usually can't make it to the scene on time to protect anyone, we all need to carry our own guns.

Police are people. We are people. Police do not have a legal obligation to protect us even though we might think that they have - check with any competent attorney. So we have the duty and right to protect ourselves and those we love... especially with guns.

Most of us are peace-loving. The few that aren't would change their ways if they knew that we all had enough self-respect to pack... and use if necessary.