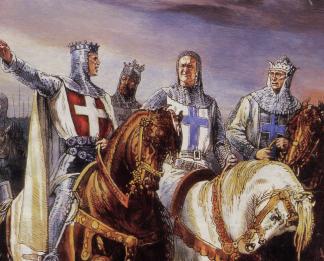 Legendary journalist Seymour Hersh has uncovered some sinister conspiracies during his long career, but his latest revelation is drawing some puzzled reactions and angry denunciations.

In a speech this week in Doha, Qatar, Hersh advanced the notion that U.S. military forces are directed and dominated by Christian fundamentalist "crusaders" bent on changing "mosques into cathedrals."

According to an account of the speech in Foreign Policy magazine, Hersh alleged that Gen. Stanley A. McChrystal, the retired head of the Pentagon's Joint Special Operations Command and briefly the top commander of U.S. forces in Afghanistan, was among several senior officers who are members or supporters of exclusive Roman Catholic organizations such as Opus Dei and the Knights of Malta.

Neoconservative advisers to President George W. Bush took the attitude that " 'we're gonna change mosques into cathedrals,' " Hersh, a writer for the New Yorker magazine, said in the speech. "That's an attitude that pervades, I'm here to say, a large percentage of the Joint Special Operations Command." The command is the part of the military focused on targeted missions to kill enemy leaders, primarily in Afghanistan and Iraq. Its operations are almost always secret.

Message to Seymour from MSM, 'No matter what evidence you have this time we aren't publishing this already well known fact:  The US Military is ruled by right wing Christian zeolot neocons who would herd every Jew on the globe onto cattle cars to force them to Israel if they could.  And then nuke the entire county so Jesus would return so we can have are religious crusade against Satan's Armies in the Middle East (aka, the Apocalypse).'  I shit thee not!  These people are in charge in your name.

"Legendary journalist Seymour Hersh has uncovered some sinister conspiracies during his long career, but his latest revelation is drawing some puzzled reactions and angry denunciations."

Zelensky Trapped by Moscow and Washington

The 'War of Terror' May Be About to Hit Europe

It Was Never About Ukraine

Will Russia Attack Germany for Aiding Ukraine with Weapons Maintenance and Training?

Which Party Won The Elections? The War Party, Of Course!

Our Veterans Never Protected Our Freedoms