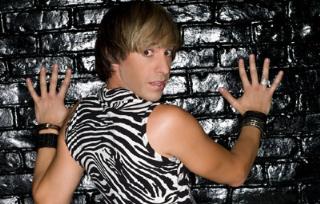 LOS ANGELES (AP) - As if his portrayals of Borat and Bruno weren't outrageous enough, Sacha Baron Cohen's next role will be playing Saddam Hussein.

The British comic will star in and co-write "The Dictator," which is scheduled for release in May 2012, Paramount Pictures said Thursday. Larry Charles, who directed Baron Cohen in "Bruno" and "Borat: Cultural Learnings of America for Make Benefit Glorious Nation of Kazakhstan," will direct once again.

"The Dictator" is inspired by a book the former Iraqi leader himself wrote, titled "Zabibah and The King."

Paramount joked in a news release: "The film tells the heroic story of a dictator who risked his life to ensure that democracy would never come to the country he so lovingly oppressed."

Here's a clip of a 1981 film called Early Warning

Avatar: The Way of the Water FIRST TRAILER: Jake and Neytiri Sully return...

The Greatest Lie Ever Sold: George Floyd and the Rise of Black Lives Matter (BLM)

THE REAL ANTHONY FAUCI: Everyone Deserves To Know The Truth

The Greatest Show on Earth (Trailer)

Tom Cruise's Space Movie Will Make Him the 'First Civilian to Do a Spacewalk...

Christopher Lloyd and Michael J. Fox's 'Back to the Future' reunion has fans in tears

Jim Stone: FRENCH GENERAL pays tribute to the UNVAXXED and calls them SUPERHEROES

Three Days of the Condor: The 1970s Movie That Revealed the Real Terror of a Deep State