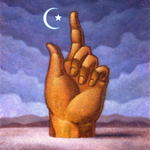 Islamist movement at forefront of Tunisia's protests ... Tunisia's underground Islamic movement has emerged at the forefront of nationwide protests against its leadership and appears set to emerge as the strongest political force in elections. ... Al-Nadha is lead by the London-based exile Rachid Ghannouchi who has said that he will return to the country as soon as the threat of life in prison is lifted. Mr. Ghannouchi has the best claims to an electoral following in Tunisia after the disintegration of the ruling party. He has wide core support at the country's universities and his followers secured 17 per cent in 1989's election – an unrivalled following in Tunisia's rigged electoral system. – UK Telegraph

Dominant Social Theme: Everybody should participate in the modern nation-state, even Islamic fundamentalists. If they attack, however, we shall have to further curtail Western freedoms in the name of security.