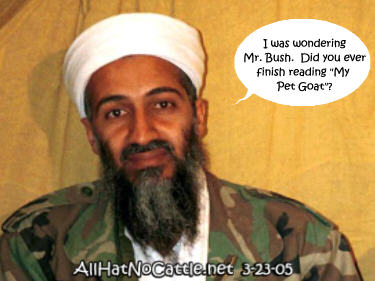 The first, and possibly the last, Guantanamo detainee to have a U.S. civilian trial was sentenced to life in prison Tuesday for his role in the 1998 U.S. embassy bombings in Africa, a case that nearly unraveled when the defendant was convicted on just one of more than 280 counts.

Ahmed Ghailani, who served as Osama bin Laden's cook and bodyguard after the bombings in Tanzania and Kenya, sought leniency, claiming he was tortured at a secret CIA camp after his arrest in Pakistan seven years ago. But U.S. District Judge Lewis A. Kaplan imposed the maximum sentence, saying that whatever Ghailani suffered "pales in comparison to the suffering and the horror" caused by the nearly simultaneous attacks, which killed 224 people and injured thousands more.

Woohoo we got Osama's cook!  It is a proud day for the justice system after that hand picked jury almost failed to convict the chauffeur finding him guilty of only one out of 280 charges.  Do you have any idea how long it took to come up with that list of bullshit?

But thank god we live in Amerika where our black robed pirates are bought to dish out incredible punitive sentences after a jury pretty much calls "bullshit" on the prosecution.  OK, it's not the death we hoped for, but it restores my full faith in our justice system.