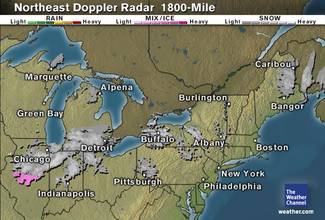 Yet another snowstorm hit the Northeast from Wednesday through early Thursday.

The storm came in two rounds, an initial burst on Wednesday morning and then a heavier round late Wednesday through early Thursday. Unlike previous storms this season, heavy snow also fell in Washington, D.C., and Baltimore in addition to Philadelphia, New York City and southern New England.

As snow began in the D.C. and Baltimore areas late Wednesday, thunder and lightning were common. Snowfall rates of 1-2 inches per hour made for a nightmare evening commute.

Is the Cascadia Subduction Zone about to blow? Swarm of hundreds of small earthquakes rattle...

This Is Not Normal! The Nation Braces For A 'Bomb Cylcone'...

Hawaii is struck by 4.0 magnitude earthquake as Mauna Loa volcano continues to erupt...

Homemade energy crisis? Another refinery, owned by Chevron, goes up in flames...

VIDEOS: Was Hurricane Ian's Destructive Path Aided by OUR OWN GOVERNMENT?