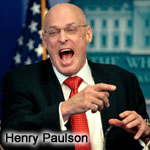 Financial Crisis Was ‘Avoidable,' Inquiry Panel Finds ... The panel appointed by Congress to investigate the causes and consequences of the financial crisis has found that there is plenty of blame to go around. The Financial Crisis Inquiry Commission's nearly two-year examination of the 2008 crisis lays blame on two presidential administrations, an alphabet soup of regulatory agencies and big players on Wall Street ... The full report is expected to be released as a 576-page book on Thursday. It was based on 19 days of hearings and interviews with more than 700 witnesses. – NY Times

1 Comments in Response to US Panel Blames Banks for '08 Meltdown, but not Central Banks