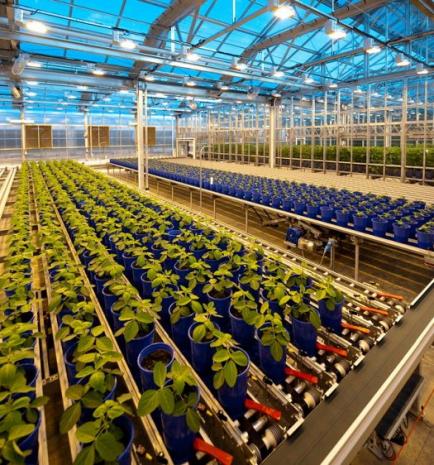 ST. LOUIS — In a nondescript basement lab, jeans-clad engineers clutch blueprints, scrape stepladders across the unfinished floor and chat about the Cardinals as they tighten bolts on a new prototype device. At first glance, it could be any machine shop in the country.

But then you notice the wispy strands of soybean seedlings curling to life, their root tendrils bunched into test tubes lightly packed with soil, and you remember — this place is all about seeds.

Originally a chemical company, Monsanto produced some of the world’s most controversial substances — saccharine, DDT, PCBs, Agent Orange — before evolving into the biotech giant it is today. That evolution has been marked by controversy, including lawsuits against farmers, allegations of unfair trade practices, and more. The company produces the herbicide Roundup, and also seeds whose genes have been engineered to survive Roundup's active plant-killing ingredient. Now the vast majority of this country’s soybeans, corn, sugar beets and canola possess those engineered genes.

For a closer look at the tools of the GE trade, check out the gallery here

Behind every single seed is at least a decade of research involving geneticists, engineers and farmers, working to produce a seed that will grow exactly as expected, and in a way nature may not have intended. Here's how it’s done.

Step one: Finding a new trait

Ginny Ursin, head of technology prospecting at Monsanto, has been studying plants most of her life; at age 10, she cobbled together a makeshift greenhouse in the front yard. It was well-built enough that a city building inspector dropped by to inquire about a permit, she recalled. After obtaining her Ph.D in genetics from the University of California-Davis, she studied the biochemical pathways that allow plants to accumulate oil. She has spent more than a decade developing a new omega-3 soybean, which actually produces a precursor fatty acid that our bodies convert into a heart-healthy type of omega-3 — fish oil without the fish. Its history includes Alaskan wildflowers, a type of mold used in Indonesian cooking and years of patient cultivation.