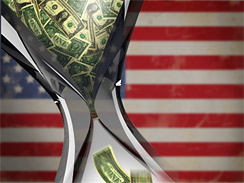 The essential facts remain: U.S. military outlays today equal that of every other nation on the planet combined, a situation without precedent in modern history.

The Pentagon presently spends more in constant dollars than it did at any time during the Cold War -- this despite the absence of anything remotely approximating what national security experts like to call a “peer competitor.”  Evil Empire?  It exists only in the fevered imaginations of those who quiver at the prospect of China adding a rust-bucket Russian aircraft carrier to its fleet or who take seriously the ravings of radical Islamists promising from deep inside their caves to unite the Umma in a new caliphate.

What are Americans getting for their money?  Sadly, not much.  Despite extraordinary expenditures (not to mention exertions and sacrifices by U.S. forces), the return on investment is, to be generous, unimpressive.  The chief lesson to emerge from the battlefields of the post-9/11 era is this: the Pentagon possesses next to no ability to translate “military supremacy” into meaningful victory.

Washington knows how to start wars and how to prolong them, but is clueless when it comes to ending them.  Iraq, the latest addition to the roster of America’s forgotten wars, stands as exhibit A.  Each bomb that blows up in Baghdad or some other Iraqi city, splattering blood all over the streets, testifies to the manifest absurdity of judging “the surge” as the epic feat of arms celebrated by the Petraeus lobby.