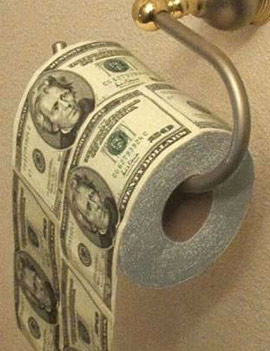 These four motivations all exist simultaneously, they all wrap around each other in their numerous interrelationships, and they all reinforce each other. What they all have in common is an overwhelming incentive to make sure that a dollar does not remain worth a dollar.

The implications of the four powerful motivations all coming together are that we have multiple, overwhelming reasons to believe that the value of the US dollar (and many other currencies) will be mostly or near entirely destroyed in coming years. Now, when paper wealth is wiped out for much of the population, and real wealth (goods and services) for a nation has taken a blow – but is not wiped out – then what we necessarily have is a massive redistribution of wealth. The personal impact interpretation of the connections that we have made in this article, is that there is very good reason to believe that the largest redistribution of wealth that has been seen in modern times is likely to be occurring over the coming years.

Inherently, the older that you are – the more likely that wealth will be redistributed away from you instead of towards you. A giant "Reset Button" will likely be pressed for the dollar, and with it the value of your savings and investments will likely evaporate – that is, if you have been following the conventional wisdom for retirement investing. You may not have that many working years left to recover from the damage, and jobs may be difficult to come by even if you want to work. So you are competing against younger workers not just for jobs, but for goods and services, where they have the current income in inflation-adjusted terms to buy these desirable goods – and you don't. Thus, the older citizens become impoverished relative to the younger citizens. This is a history that has been repeated time and again across nations and across the centuries – it is the pensioners that get nailed when the currency reset button gets pressed.

Biden's executive order a direct threat to the dollar.

I am not prepared enough...Getting ready for a dollar collapse and a economic reset.

Biden to Replace US Dollar?

Is it wrong to hope for a collapse? A collapse might be the only way to fix it, but it is risky.

The Trust Game - Episode 6: "One World or None"

They Have Lost Control, And Now The Dollar Is Going To Die