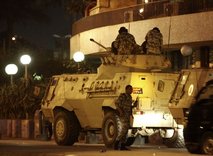 The Egyptian government cut off the country's Internet access late Thursday night ahead of what was expected to be the fourth and most intense day of protests against the regime of Egyptian President Hosni Mubarak, making it virtually impossible for the world to reach the nation of 80 million. Only a network used by the stock exchange and banks was allowed to stay live.
This is a very deep blow to the Egyptian people. There are more than 500 independent journalism publications in Egypt and more than 160,000 bloggers, and the nation boasts more opposition dailies than in any other Middle Eastern country.
Two-thirds of Egypt's population is under the age of 30, thousands of its citizens blog, and an estimated 3.4 million Egyptians are on Facebook. And according to OpenNet Initiative -- a site that tracks Internet freedom throughout the world -- more than 30 percent of Arabic-language blogs are Egyptian.
Now the question is whether -- after Egyptians have embraced America's democratic message by speaking out against their authoritarian government -- they will get help from the United States.