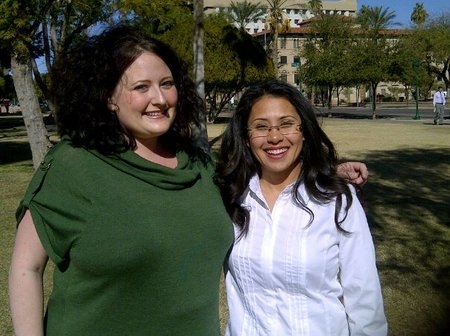 On the day that state Senator Russell Pearce's insidious, anti-American, and unconstitutional plot to undermine the birthright citizenship provision of the U.S. Constitution's 14th Amendment was being submitted in the state legislature by his cronies, a group calling itself Arizonans for Better Government filed recall paperwork against Pearce in Legislative District 18.

Chaired by the fierce, indefatigable DeeDee Blase of Somos Republicans, the group's stated grounds for recall refers implicitly to today's 14th Amendment travesty, and reads like a battle-cry against Russell Pearce Republicanism.

"We find Russell Pearce's overt disdain for the United State's Constitution to be indicative of his inability to govern as prescribed by his job description and the oath he took to regain his seat in the state Senate."

Now the clock begins to tick. Blase and her compatriots must submit 7,756 valid signatures of qualified electors to the Arizona Secretary of State's Office by May 27, 2011. If they do so, and the signatures are duly verified, Assistant Secretary of State Jim Drake tells me that Pearce can either resign or face a recall election.

According to Drake, depending on how quickly the signatures are submitted, this could take place in November of this year or Spring of 2012.