MIAMI LAKES, Fla.—Before BankUnited FSB collapsed in May 2009, employees lit candles and prayed that Florida's biggest bank would survive the bad loans it made before the housing bubble burst. 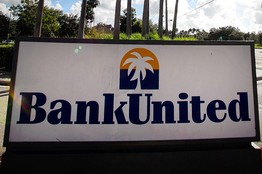 The miracle came in the form of Uncle Sam, or more precisely, the Federal Deposit Insurance Corp., which sold the failed BankUnited to a group of Wall Street financiers led by a longtime New York banker. The FDIC agreed to reimburse as much as $10.5 billion in future loan losses—and gave the new owners $2.2 billion in cash. The buyers paid $945 million.

Since then, BankUnited has become one of the most profitable, highly capitalized financial institutions in the U.S. Deposits are pouring in, loans are flowing to businesses, and executives are itching to buy banks in Florida and New York City.