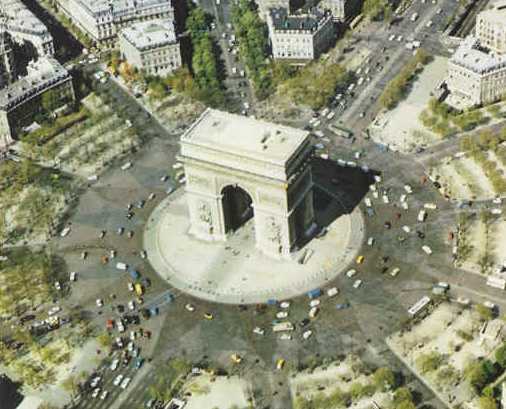 Roundabouts are endorsed by the Nevada Strategic Highway Safety Plan because of their ability to safely and efficiently move traffic. Here are some benefits of roundabouts.
Safer than signalized intersections 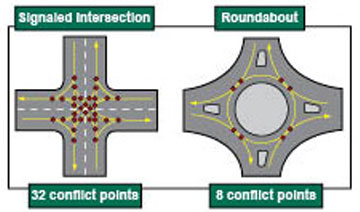 Intersection safety is a serious traffic problem in the United States. The Federal Highway Administration reports that, in just one recent year, approximately one death occurred every hour nationwide relating to intersections. Over nine thousand people lost their lives in traffic intersections in that recent year, equaling nearly one quarter of all traffic fatalities and amounting to a financial loss of over $96 billion.

With different crossing and entering movements by drivers, bicyclists and pedestrians, an intersection is one of the most complex traffic situations that drivers can encounter. In a traditional four-way traffic intersection, there are 32 points of conflict in which two vehicles may collide. Modern roundabouts have only eight conflict areas, greatly reducing the potential for crashes. On the other hand, the circulating movement of modern roundabouts nearly eliminates the potential for high-speed, right angle and left turn/head-on collisions. Rear-end collisions are also often reduced in roundabouts.
Reduces frequency and severity of crashes

As speeds in modern roundabouts are often much slower than in intersections, any potential roundabout crashes are usually at lower speeds, and at less-dangerous angles (such as sideswipe). This translates into less severe injuries and property damage, if any. A study printed in the Transportation Research Record reported that converting 23 test intersections throughout the U.S. from traffic signals to roundabouts reduced injury crashes by 80 percent, and reduced all crashes by 40 percent, in those areas. Results were much the same for similar studies throughout the U.S. and Europe.

Traditional traffic signals usually stop two or more directions of traffic at one time. In roundabouts, all directions of traffic are often kept open and safely flowing. Several Insurance Institute for Highway Safety studies report significantly-improved traffic flow when traditional intersections are converted to roundabouts. A study of three such intersections in Nevada, Kansas and Maryland found that traffic delays were reduced 13-23 percent using roundabouts. Similar studies have shown a reduction of up to 89 percent in vehicle delays in roundabouts.

With limited or no electrical costs and lower maintenance costs, operational savings from roundabouts have been estimated at an average of $5,000 per year. In addition, the service life of a roundabout is approximately 25 years, versus approximately 10-20 years of service life for traffic signals.

More environmentally-friendly than traditional intersections due to less vehicle emissions, fuel use and noise

Paris’ famous Arc De Triomphe monument stands in the middle of what is perhaps the world’s most famous traffic circle. While modern roundabouts are smaller and often easier to navigate than this Paris example, the center circle of many U.S. roundabouts still provide opportunities for unique community gateways and landscaping/aesthetics. As opposed to traffic lights, roundabouts provide an opportunity for landscape and aesthetic improvements that can enhance and define corridors, cities, and tourism.

1 Comments in Response to Traffic go you down? use Roundabouts.

Paying People to Not Buy What Sells