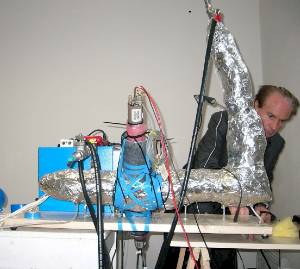 Research papers out of the University of Bologna confirm that much more energy is coming out of the reactor than is required to run the reactor, including a self-running mode; and that radiation is not escaping from the machine.

A couple of weeks ago we reported that the Italian inventor Andrea Rossi has announced that he has a commercial ready cold fusion reactor that is safe and reliable, capable of producing 10 kW of heat; and is in process of going into production, with a 1 MW plant being built ganging 125 of these units together.

Rossi has allowed outside scientists to perform tests on the module and report on their findings. Papers on these tests have begun to emerge.

In a paper that came out Monday morning (Italy time), Prof. Giuseppe Levi of the University of Bologna describes two experiments. One was performed in December of 2010 and the other on January 14 of 2011, during the public demonstration and press conference. In both experiments Andrea Rossi's cold fusion reactor is tested to determine if more energy is output than input. The results are clear that in both tests much more energy was produced than was put into the system.

In the first test, Levi reported that Rossi's device actually self-sustained for approximately 15 minutes after all power was cut, until they had to stop the reactor by applying additional cooling water. When reading the document one may realize that the output energy for the second test is missing. However, this information has already been posted and was over 10KW.

In the second paper (ref, pp. 7-12) Dr. David Bianchini, also of the University of Bologna, describes his tests to determine if radioactivity is escaping the system for safety purposes, during the January 14 demonstration. He detects no radiation escaping the shielding of the system.

Another paper describing a test to determine what radiation is produced inside of the cell is posted here.

Then, in a paper that came out on January 26, Mauro Villa, also with Bologna University, describes his tests to determine if any gamma radiation is being produced inside of the reactor. Two holes were placed in the shielding to allow radiation to be measured. No gamma radiation significantly above background was detected. However, he does not discount the possibility of lower energy gamma rays being produced.

Classical physics predicts that some type of radiation must be produced by the system to heat the components of the reactor to heat the water. Villa had predicted that gamma radiation is the most likely culprit, but his measurements did not verify that premise. So either this is not a fusion reaction according to classical physics, or there is some kind of new physics taking place that is yet to be understood and characterized.

Some speculate that perhaps X-Rays are being emitted. The lead shielding in the apparatus is consistent with this presumption. This would be similar to the X-Rays produced by Black Light Power's system involving Hydrinos – a smaller, more energetic variation of the hydrogen atom. (Ref.)

Rossi claims that outside scientists have tested his system to determine if X Rays are produced, but has not yet received the results.

Since these new papers have been posted many new messages have been posted in the comment section of the Journal of Nuclear Physics blog run by Rossi. Some of his answers confirm what he has already said, and others give new information. For example,

He is starting a 1 year research program with the University of Bologna to investigate the reactions inside of the reactor. Work on the 1MW plant is nearing completion and will open in a "matter of months." The wait is mostly due to "authorization" issues.  The volume of the reactor is 1 liter.  They expect their patent that covers their catalysts and special processes done to the nickel to be granted by the time the 1MW plant opens.  When the patent is granted they will release full details on the catalysts, special processes done to the nickel, construction of the device, etc. They have ran their device in self-sustain mode for several hours at a time.

So where are we at this point?

It seems more people think this technology is legitimate. Of course the final proof of this will be when the 1MW plant opens.

Also, the news about his technology is spreading. Articles have appeared in EE Times, Zero Hedge, Popular Science, Discovery, TechEye, Fox News, Gizmodo, Motherboard, Mother Nature Network, and elsewhere.  Most of these are highly skeptical and cite PhysOrg as their primary source, which cited our January 17 PESN coverage as its primary source.

We continue to chronicle the main developments at PESWiki.com.

Lawrence Rayburn has posted some comments in a forum, which we've compiled, in which he seems to think it wouldn't be hard to build one of these cold fusion reactors. He claims to have built a working Tesla Radiant Energy Collector some years ago, but he thinks this cold fusion reactor is much more simple and plausible for widespread implementation.