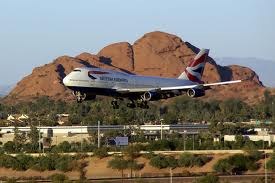 Travelers are being grounded as cities across the country gear up for massive winter storms.

U.S. Airways (NYSE:LCC) has canceled 16 flights coming in and out of Phoenix due to the storms, said Andrew Christie, associate manager of U.S. Airways Media Relations. A total of 141 mainline and 458 Express US Airways flights have been canceled nationwide due to the storm.

Southwest Airlines has canceled 700 flights nationally but does not have specific numbers for Phoenix, spokeswoman Olga Romero said. Many flights going to Phoenix are being canceled from affected cities, she said.

Southwest Airlines MAYHEM: Tens of thousands of people are stranded, their bags LOST...

Buffalo is plunged into chaos with brazen looters destroying stores...

A warm Christmas in store for the Valley

Hell freezes over as ice storms cause chaos across the nation: