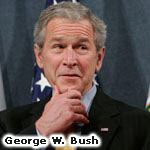 Egypt protests show George W. Bush was right about freedom in the Arab world ... For decades, the Arab states have seemed exceptions to the laws of politics and human nature. While liberty expanded in many parts of the globe, these nations were left behind, their "freedom deficit" signaling the political underdevelopment that accompanied many other economic and social maladies. In November 2003, President George W. Bush laid out this question: "Are the peoples of the Middle East somehow beyond the reach of liberty? Are millions of men and women and children condemned by history or culture to live in despotism? Are they alone never to know freedom and never even to have a choice in the matter?"... So a new set of questions becomes critical. What lesson will Arab regimes learn? Will they undertake the steady reforms that may bring peaceful change, or will they conclude that exiled Tunisian President Zine el-Abidine Ben Ali erred only by failing to shoot and club enough demonstrators? And will our own government learn that dictatorships are never truly stable? – Washington Post

Dominant Social Theme: The West must shoulder the burden of providing freedom worldwide.

2 Comments in Response to Is Middle East Freedom the Bush Legacy?

If the Fascist Filth in DC wants to provide freedom for the world, they can start right here in the USA by killing themselves.

No, Bush's legacy is 10 years of bloody, unwinable, unlawful war, with no end in sight.  While he enjoys a coctail on his ranch in Texas men are mutiliated and men die in Afganistan and Iraq - for nothing.