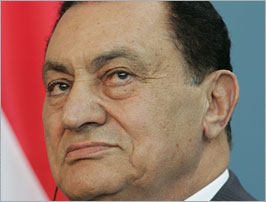 UPDATE: Now a major announcement is imminent from state TV.

Al-Arabiya says a rumor spread through Egypt this morning that the president has agreed to step down with certain guarantees. This produced celebrations and a tremendous feeling of relief in the crowd at Tahrir Square, says a commentator on Al-Jazeera.

However it remains just a rumor. Developing.

There are other signs that today could be a turning point, like the decision to air protest footage on Egyptian TV. And as the protestors stay peaceful, Mubarak can no longer play the chaos card.

A major shift here that may signal a further weakening of the resolve of the Mubarka government.

State TV is now shoring images of the protesters, and interviewing them for the first time.

This screencap is from Al-Jazeera playing state TV.