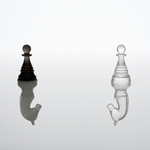 In a shocking revelation contained in the latest Wikileaks document dump, previously secret information indicates that Al Qaeda now has the nuclear bomb and intends to use it. The documents, which were fed to Wikileaks from anonymous whistle-blowers and passed along to The Daily Telegraph.for publication, show that a leading atomic regulator privately warned that the world stands on the brink of a nuclear 9/11. Al Qaeda, which has sourced nuclear material and recruited rogue scientists to build so-called 'dirty bombs,' is on the brink of not only producing but deploying atomic weapons in order to advance the goals of Muslim extremists against the West. Further, various Jihadi groups are also close to producing biological and chemical weapons that could kill thousands in terrorist attacks. – Examiner

Dominant Social Theme: Assange is a blond stranger come to save the world.

Oh no! Another Al-CIA-Aidea false flag operation.  Would this be the nuke stolen by Chaney from the AFB in North Dakota?