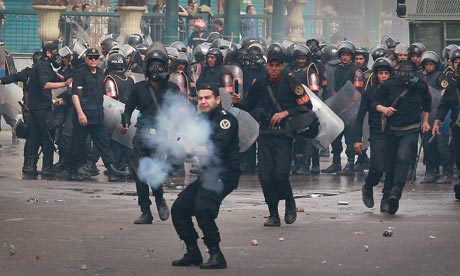 In  early January 2010, Bob Livingston, a former chairman of the appropriations committee in the US House of Representatives, flew to Cairo accompanied by William Miner, one of his staff. The two men were granted meetings with US Ambassador Margaret Scobey, as well as Major General FC "Pink" Williams, the defence attaché and director of the US Office of Military Cooperation in Egypt. Livingston and Miner were lobbyists employed by the government of Egypt, helping them to open doors to senior officers in the US government. Records of their meetings, required under law, were recently published by the Sunlight Foundation, a Washington, DC watchdog group.

Although the names of those who attended the meetings have to be made public, the details of what was discussed are confidential. I called Miner to ask him about their meetings, but he referred me to Karim Haggag, the spokesman for the Egyptian embassy in Washington, who did not respond. Miner did confirm that he was a retired Navy pilot who had worked for clients like the Egyptian government, as well as several military contractors.

The cozy relationship between the lobbyists, members of the US Congress, Pentagon officials and the Egyptian government is easily explained: much is at stake. Egypt has received over $70bn in economic and military aid approved by the US Congress in the past 60 years, according to numbers compiled by the Congressional Research Service. Maj Gen Williams is the man in charge of the $1.3bn in annual US military aid supplied to the country.

Does Mass Resistance Now Seem Possible? It Damn Well Should!

Chinese Covid protests: Police crack down on backlash as crowds gather in cities

Tanks on the streets spark fears of new Tiananmen Square as Chinese Communists...