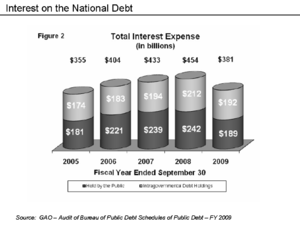 Budgeted net interest on the public debt was approximately $189 billion in FY2009 (5% of spending). During FY2009, the government also accrued a non-cash interest expense of $192 billion for intra-governmental debt, primarily the Social Security Trust Fund, for a total interest expense of $381 billion. This accrued interest is added to the Social Security Trust Fund and therefore the national debt each year and will be paid to Social Security recipients in the future. However, since it is a non-cash expense it is excluded from the budget deficit calculation.[50]

Net interest costs paid on the public debt declined from $242 billion in 2008 to $189 billion in 2009 because of lower interest rates.[51] Should these rates return to historical averages, the interest cost would increase dramatically. Historian Niall Ferguson described the risk that foreign investors would demand higher interest rates as the U.S. debt levels increase over time in a November 2009 interview.[52]

Public debt owned by foreigners has increased to approximately 50% of the total or approximately $3.4 trillion.[53] As a result, nearly 50% of the interest payments are now leaving the country, which is different from past years when interest was paid to U.S. citizens holding the public debt. Interest expenses are projected to grow dramatically as the U.S. debt increases and interest rates rise from very low levels in 2009 to more typical historical levels.