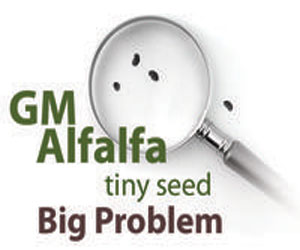 Phil Geertson is a conventional alfalfa seed grower who has been involved in efforts to stop GE (genetically engineered) alfalfa since 2003 resulting in a Supreme Court decision in 2010 on Forage Genetics/Monsanto’s GE alfalfa.

When RR (Roundup Ready) alfalfa was first proposed, Geertson realized that all alfalfa could quickly be contaminated by the Roundup Ready RR gene and that is the reason that he was the lead plaintiff against the USDA for deregulating GE alfalfa in 2005. Deregulation of GE crops means that seeds and plants may be planted without any restrictions. Geertson said that GE alfalfa will contaminate all alfalfa plants!

Top Foods to Improve Your Vision

Will a Milk Cow SAVE You Money? The Surprising Truth