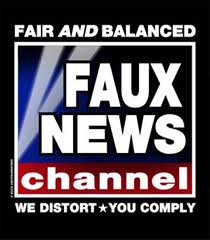 News flash: Fox News is not an unbiased purveyor of information. Not news, you say? OK, it's true that Steve Benen and Conor Friedersdorf say exactly that on almost a daily basis. What is news is that the latest criticism comes from a former employee of the network itself. Roger Ailes runs a famously tight-lipped ship, and ex-staffers tend to be reluctant to talk about their work at Fox, even anonymously. But Media Matters obtained some comments from an anonymous former employee who says flatly that Fox is "a propaganda outfit." When asked what people would be most surprised to learn about the network, the source said, "I don't think people would believe it's as concocted as it is; that stuff is just made up." He or she says Fox has gotten more and more partisan over the years: "For the first few years it was, let's take the conservative take on things. And then after a few years it evolved into, well it's not just the conservative take on things, we're going to take the Republican take on things. ... And then two, three, five years into that it was, we're taking the Bush line on things." With Bush out of the news, producers have had to find other things to be worked up about. "If one controversy faded, goddamn it they would find another one," the source said. "You always have to seem like your values are under attack. The brain trust just knew instinctively which stories to do, like the War on Christmas."