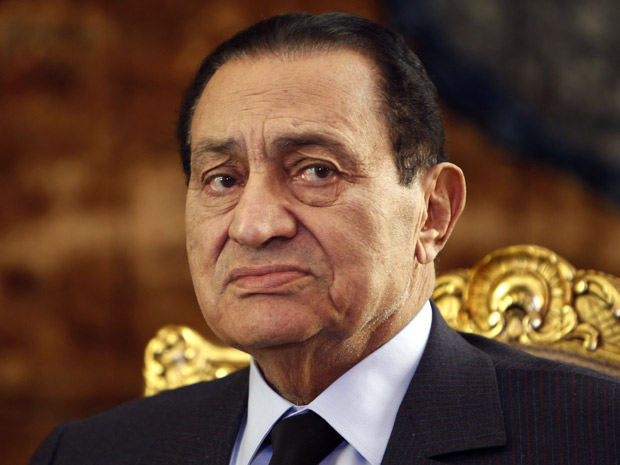 After 18 days of protests, Egyptian President Hosni Mubarak has given in to demonstrators and handed power over to the military, Vice President Omar Suleiman announced on state-run TV today. "In these grave circumstances that the country is passing through, President Hosni Mubarak has decided to leave his position as president of the republic," Suleiman said. "He has mandated the Armed Forces Supreme Council to run the state. God is our protector and succor." Mubarak's resignation brings an end to 29 years in power, and comes in the wake of reports that he had fled Cairo to the southern city of Sharm el-Sheikh earlier today. Demostrators in Tahrir Square chanted "we have brought down the regime" and opposition leader Mohamed ElBaradei (who denounced Mubarak in a Friday New York Times op-ed) told the Associated Press that today is "greatest day of my life." Mubarak was expected to resign last night, but instead only handed partial power to Suleiman, prompting tens of thousands of chanting, enraged protesters to flood Cairo's streets on Friday in six coordinated marches. In the biggest nationwide protest since the unrest began on Jan. 25, hundreds of thousands of demonstrators took to the streets across the country calling for Mubarak's resignation. Although there is "a strong military presence" in Cairo, Al Jazeera reports that there is "no indication that the military want[ed] to crack down on protesters" and says that army officers have been engaging in "friendly" dialogue with demonstrators.