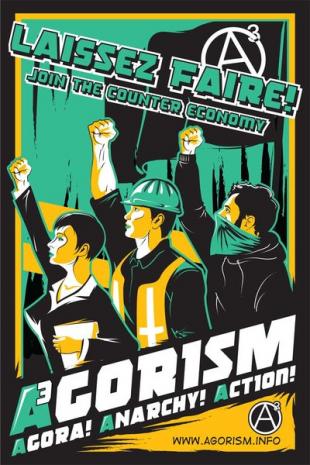 Let's take a look at Egypt. What has all this sound and fury wrought? The 30 year-long reign of American puppet and despot Hosni Mubarak is now over. He has allegedly fled the country. The decades of anger from the abuses suffered under this man's regime finally spilled over into an insurmountable wave that has cleansed that nation of ... exactly one tyrant.
We, as agorists, see much to admire in the revolutions sweeping Tunisia, Egypt, Algeria, and numerous other Middle Eastern and North African states. The people there became acutely aware of the injustice of the Egyptian regime; and, despite fear and oppression, they resisted the police-state and demanded something better. We saw a largely leaderless, spontaneous, bottom-up organization to the protests. As government services shut down in an attempt to stymie the protestors, vendors sprang into action to provide food, water, and communications. People banded together to provide impromptu protection forces for neighborhoods as police all but disappeared—no doubt deployed entirely to guard "State property", protect bureaucrats, and attack protestors. These impromptu forces could, in time, have formed the seed kernal for private protection forces—a free market alternative to State police.
But, alas, this will all die in its infancy.