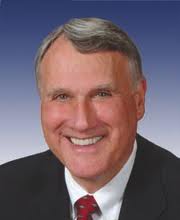 Rep. Jeff Flake, R-Ariz., will announce Monday that he will run for the U.S. Senate being vacated by Sen. Jon Kyl, a source has told The Arizona Republic.

Flake, who was first elected to Congress in 2000, has long expressed interest in running for the Senate. He will make it official at an 8 a.m. news conference at the same Phoenix hotel where Kyl on Thursday announced that he will retire when his current term ends in January 2013.

Flake's decision to run for the Senate is sure to rev up Republican competition for his GOP-heavy congressional district. He's also expected to have plenty of competition in the Senate primary.

1 Comments in Response to Flake to announce Senate bid Monday

Jeff Flake is not better than the two traitors John McPain and Jon Kyle beleive me I know . I have lived in Az 28 years and I have seen Jeff Flake and his pro illegal agenda bring us to the point we are now. You just get another mccain and kyle with jeff flake, this man will be yet another disaster to this state . I worked on prop 200 in this state and Jeff flake did everything along with mccain and kyle to destroy it. Just another puppet with jeff flake .

When It Comes to Conducting a War, the Kremlin Has Proven Its Incompetence

THIS Is Why Trump Is Still Relevant

"Defending Democracy" Through Fascist Nationalism and Suicidal Military Spending? No, Than

Tucker: How did this happen?

What are the Odds of These Four Politicians All Have Children Working for Ukraine Gas Companies?