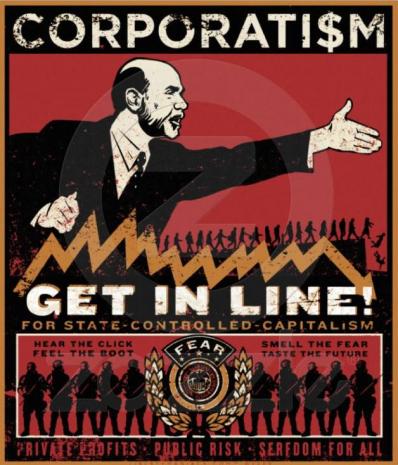 The real issue highlighted by this episode is just how lawless and unrestrained is the unified axis of government and corporate power.  I've written many times about this issue -- the full-scale merger between public and private spheres --  because it's easily one of the most critical yet under-discussed political topics.  Especially (though by no means only) in the worlds of the Surveillance and National Security State, the powers of the state have become largely privatized.  There is very little separation between government power and corporate power.   Those who wield the latter intrinsically wield the former.  The revolving door between the highest levels of government and corporate offices rotates so fast and continuously that it has basically flown off its track and no longer provides even the minimal barrier it once did.  It's not merely that corporate power is unrestrained; it's worse than that:  corporations actively exploit the power of the state to further entrench and enhance their power.

That's what this anti-WikiLeaks campaign is generally:  it's a concerted, unified effort between government and the most powerful entities in the private sector (Bank of America is the largest bank in the nation).  The firms the Bank has hired (such as Booz Allen) are suffused with the highest level former defense and intelligence officials, while these other outside firms (including Hunton & Williams and Palantir) are extremely well-connected to the U.S. Government.  The U.S. Government's obsession with destroying WikiLeaks has been well-documented.  And because the U.S. Government is free to break the law without any constraints, oversight or accountability, so, too, are its "private partners" able to act lawlessly.  That was the lesson of the Congressional vesting of full retroactive immunity in lawbreaking telecoms, of the refusal to prosecute any of the important Wall Street criminals who caused the 2008 financial crisis, and of the instinctive efforts of the political class to protect defrauding mortgage banks.

The exemption from the rule of law has been fully transferred from the highest level political elites to their counterparts in the private sector.  "Law" is something used to restrain ordinary Americans and especially those who oppose this consortium of government and corporate power, but it manifestly does not apply to restrain these elites.  Just consider one amazing example illustrating how this works.

After Anonymous imposed some very minimal cyber disruptions on Paypal, Master Card and Amazon, the DOJ flamboyantly vowed to arrest the culprits, and several individuals were just arrested as part of those attacks.  But weeks earlier, a far more damaging and serious cyber-attack was launched at WikiLeaks, knocking them offline.  Those attacks were sophisticated and dangerous.  Whoever did that was quite likely part of either a government agency or a large private entity acting at its behest.  Yet the DOJ has never announced any investigation into those attacks or vowed to apprehend the culprits, and it's impossible to imagine that ever happening.

Why?  Because crimes carried out that serve the Government's agenda and target its opponents are permitted and even encouraged; cyber-attacks are "crimes" only when undertaken by those whom the Government dislikes, but are perfectly permissible when the Government itself or those with a sympathetic agenda unleash them.  Whoever launched those cyber attacks at WikiLeaks (whether government or private actors) had no more legal right to do so than Anonymous, but only the latter will be prosecuted.

That's the same dynamic that causes the Obama administration to be obsessed with prosecuting WikiLeaks but not The New York Times or Bob Woodward, even though the latter have published far more sensitive government secrets; WikiLeaks is adverse to the government while the NYT and Woodward aren't, and thus "law" applies to punish only the former.  The same mindset drives the Government to shield high-level political officials who commit the most serious crimes, while relentlessly pursuing whistle-blowers who expose their wrongdoing.  Those with proximity to government power and who serve and/or control it are free from the constraints of law; those who threaten or subvert it have the full weight of law come crashing down upon them.

BlackRock Logo to Be Added to Ukrainian Flag