Gerald Celente has an excellent piece on the Superbowl entitled Are Americans Sure Their Flag Is Still There?

Good stuff. But I'm wondering, not just if there's a flag still there, but which one?

Besides the banality of this meaningless exchange and the usual attempts to polarize viewers and pretend they have some significance in the grand scheme of things, I was more taken by the fringed Maritime flag featured behind Obama during the interview. (Stop after you see the flag if you like, sickening interview..)

How many understand the significance of the fringed Maritime flag? Significant?

You bet it is. A whole other set of laws are in effect under the fringed Maritime flag. And we're seeing it continue to become more and more prevalent on military uniforms, police and private security uniforms, in public areas and throughout government. It's not just a pretty decoration.

It has a more serious significance than most could imagine. It's an abdication of national and personal power. 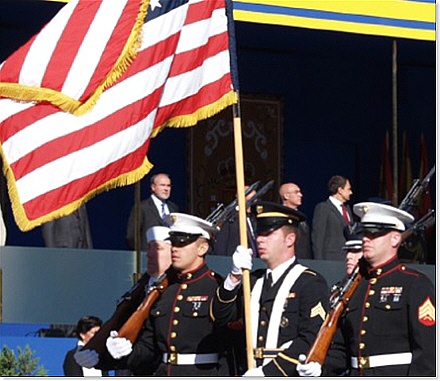 These young men have no idea they're property of a corporation, not a constitutional government

Under Maritime Admiralty law the corporation of the United States, not the constitutional entity, is in control. For those of you unfamiliar with maritime law and its legal implications, here's a brief explanation:

Immelt and Obama talking business in a GE factory