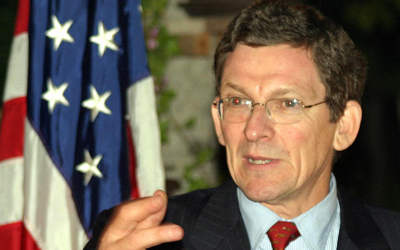 Later this week, Hillary Clinton is expected to announce her choice to replace Richard Holbrooke as the new special envoy to Afghanistan and Pakistan: Marc Grossman. Grossman's diplomatic career includes three years as the US Ambassador to Turkey, four years as the Under Secretary of State for Political Affairs, and three years as Assistant Secretary of State for European Affairs, bringing him to his current gig as Vice Chairman at The Cohen Group, a corporate leadership firm.

A quick look at Grossman's work in these previous roles and the stances he has taken on key issues may give us better insight into the man who would be Richard Holbrooke.