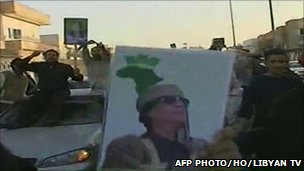 Dozens of people are said to have been hurt in the clashes in Benghazi.

The overnight unrest followed the arrest of an outspoken government critic, who was reportedly freed later.

The unrest comes a day before planned anti-government demonstrations on Thursday, dubbed a "Day of Anger", which are being organised via internet social networks.