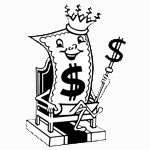 Ashraf Abdel-Wanis had plenty of reasons to join tens of thousands of fellow Egyptians in their successful push to oust President Hosni Mubarak. At 39, he last worked five years ago in a sugar factory and now gets by mainly on his wife's $50 monthly salary and his mother's pension. "The Egyptian family's nutrition consists of beans, lentils and beans," he said in an interview in Cairo's Tahrir Square, the plaza at the heart of almost three weeks of protests. "If they're lucky, they cook vegetables once a week." Now with Mubarak gone, the plight of Abdel-Wanis and the 40 percent of his countrymen near the poverty line is prompting Finance Minister Samir Radwan to develop a stimulus plan aimed at creating the jobs needed to avoid further social unrest ... Radwan said any new fiscal plan should include a "massive and realistic employment program" that would use "funds and wealth at the command of the state to attract the private sector." – Bloomberg

Dominant Social Theme: Financiers and other wise men to the rescue.