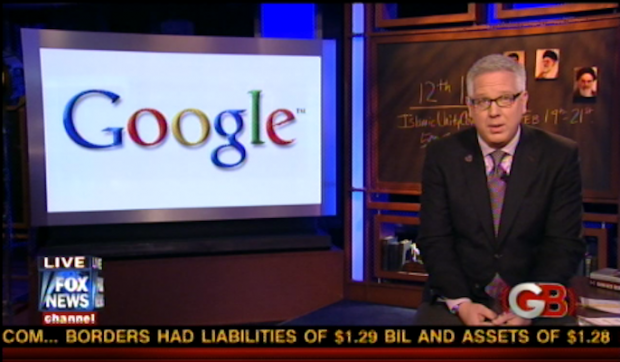 Around the 27:57 mark… Glenn Beck and obviously NewsCorp unleashes on Google Inc. The story Beck weaves is one of Google deeply involved in domestic spying, with deep intelligence connections to factions within the intel community. It is a story of Google’s activism, both in cash and deeds as their recently resigned head honcho is quoted as praising the efforts of a Google employee to help bring down the Egyptian government and Hosni Mubarak. But that is not all Google has been involved in that, in Becks words constitutes, an attempt to overthrow a nation:

I know that story.

Mark Yannone was a Libertarian congressional candidate in Arizona in 2004. He took it upon himself to launch an investigation of Google’s acting on behalf of someone in the government (or connected to it through board membership [was the library of congress computer comfortable?]) to censor information that exposed the Equal Employment Opportunity Commission (EEOC). His work led to further investigation and is used in the coming book Roll Over Martin. Mark died in his home, “in his sleep” on 17 July 2009. He was a great guy and a complete PATRIOT!